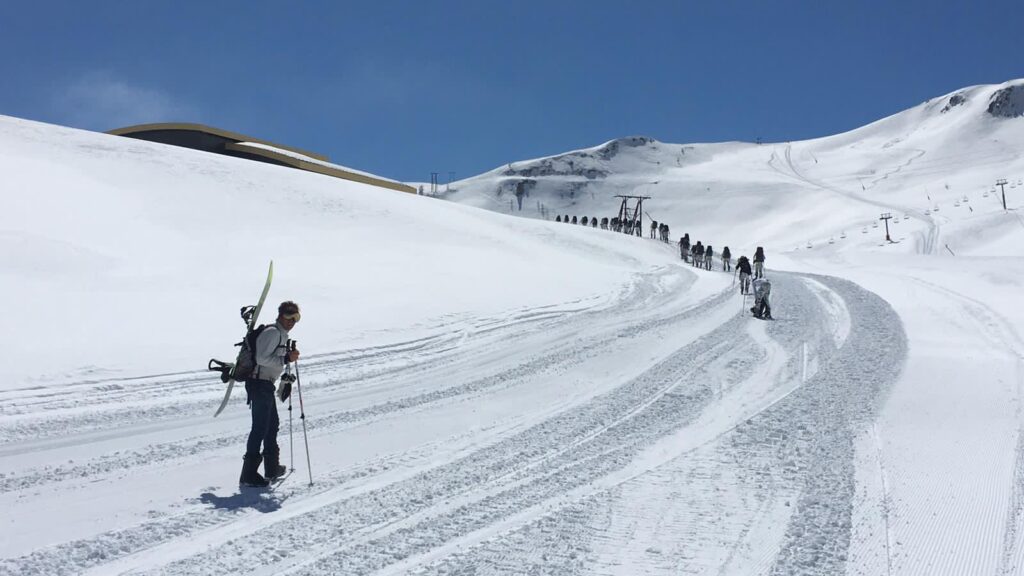 My first time ski touring in Tignes. Following the crowd of ski tourers.

I’ve always considered myself a pretty boring skier; I enjoy going up the lifts and heading back down on the piste in my own time chatting with friends and family as I go. However, with the outbreak of Coronavirus, the lifts have been shut for the season, so when I was asked to fly out to start working as a PR Intern for Val Heliski, I anticipated a pretty ski-free season. That was until the excellent team at Val Heliski decided they would make a ski tourer out of me yet.

I must admit, when I heard that I would be learning to ski tour, my mind jumped straight to extreme skiers who seem to glide down the vertical edge of a mountain in zones never before seen by mankind. Although, I was quickly assured that was not the case (unless I wanted it to be). Whilst I had the technical skill to ski down challenging routes, I knew that with nearly six years off the slopes, my confidence needed a little work.

Without any gear, I needed to deck myself out to ensure I could comfortably get both up and down the mountain. Val Heliski’s partnership with Salomon, meant they were able to kit me out with skis, skins, boots, a transceiver and even an ABS pack. However, there was more to learn then I had realised; I still had no idea how to actually walk up the mountain.

I had seen people ski touring before, trekking up with their skis not completely attached to their boot and I had wondered how they could walk up the slopes. Did they just have an incredible ability to resist gravity? Or was their upper body strength so impressive that they could simply pull their way up using their poles? It turns out neither of these are the case. Instead, they bring out their skins. Skins are strips of materiel that attach to the bottom of nordic, alpine, or touring skis to help while ascending the slopes and they are removed once you’ve reached the top allowing you to ski back down. So, it wasn’t a gravity-defying talent after all! It also appears that those ski tourers I had seen in previous years had actually put their boots into their ski bindings properly, and were able to alter their bindings for ski touring (randonnée). I was taught how to alter my bindings, however I’m still working on doing it with my skis on!

However, there was more to learn than I had realised; I still had no idea how to actually walk up the mountain. 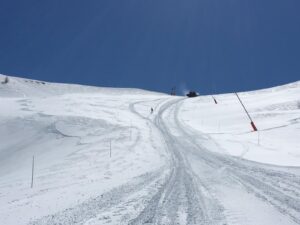 Now it was time to actually start touring…and it was absolutely fantastic. Well, fantastic is a strong word; I had blisters, I was boiling hot and exhausted. I had considered myself relatively fit before this season, however I was apparently mistaken. I certainly hadn’t packed enough water and a snack at the top would’ve been very welcome but all of that was a walk in the park (or mountains!) in comparison to the now raging blisters on my heels. As I complained to my ski touring buddy, curious as to how he was striding up without this excruciating rubbing only angering my blister more, he only laughed and said, “duct tape!”. Duct tape? I wasn’t sure what on Earth he was on about. However, it turns out that duct tape on your heels is the best thing to avoid blisters as you tour up the slopes. I will definitely remember that next time.

To be honest, I had a great time. Whilst I was nervous beforehand, I now know I had absolutely nothing to fear. Ski touring is not just reserved for the adrenaline junkie and thrill seeking skier. In fact, there was something immensely serene about striding up the mountain, taking in the gorgeous landscape and basking in the silence, knowing that I had earned the ski back down. Of course, it was hard work but I certainly look forward to doing again.

To be honest, I had a great time. Whilst I was nervous beforehand, I now know I had absolutely nothing to fear. 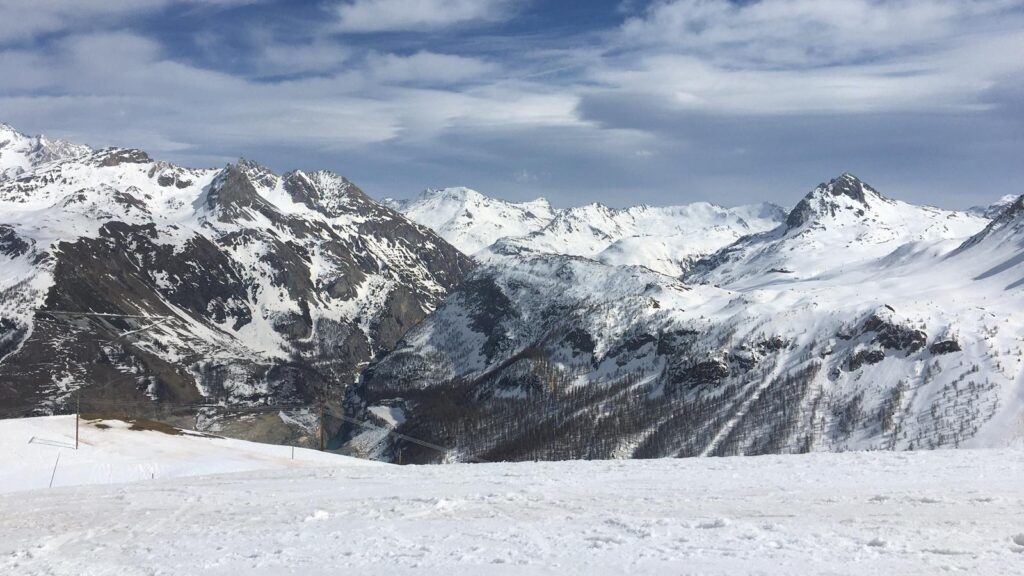 I made it! The views from the top of Tignes were breath-taking!

Val Heliski offer Ski Touring Equipment Hire from only 33 Euros per day in the French ski resorts of Val d’Isere, Tignes, Les Arcs, Villaroger and Sainte Foy Tarentaise. Our range of touring skis, splitboards and avalanche safety equipment is available to hire for the holidays.